Ibstock Place School traces its roots back to the late 19th century when it was originally established as the Froebel Demonstration School in West Kensington. Moving to its present location adjacent to Richmond Park in Roehampton, south London in 1946, it is an independent co-educational day school (comprising a Prep School and a Senior School) for pupils aged 4 to 18.

The school’s continued growth has necessitated an ongoing programme of expansion better to accommodate its pupils and develop the range of facilities offered. Since 2007, it has opened a new Sports Hall, ‘New School’ (including science laboratories, classrooms and a purpose built Library), a Theatre and, in 2020, a new Refectory. Designed by architects MacreanorLavington, this comprises a Great Hall, Small Hall, Mezzanine level dining and Sixth Form Study Centre.

We were contracted to specify, design, install and commission two separate A/V systems for use in Great Hall and, later, the Sixth Form Study Centre respectively. The project was led by Adam Broom, our Projects And Installations Manager, who outlines the brief provided by the school:

“Initially we were asked to install a sound system for the dining hall, a magnificent wood-lined room with a very high ceiling, which the school wanted to be able to use for events and other activities beyond just dining. It’s a large rectangular shape and the brief was to create an audio solution that could be easily and quickly reconfigured to suit two different presenter locations, at either the long or short sides. This was achieved by a combination of recallable presets on a custom control panel and a small physical adjustment of four of the eight loudspeakers when required. This refocuses the audio imaging correctly regardless of which position the presenter chooses.”

“As is almost always the case with our system designs for education, the key feature is that the system by day should be easy to use and setup by any staff member. This is achieved by installing bespoke touchscreens which provide a custom control platform for students, staff or the AV team, giving different controls for each user group. Configuring the Great Hall system for most academic events (assemblies, meetings, dance classes, music rehearsals etc) is done via the touchscreen or mobile device interface and the system can be monitored and supported remotely by the IT or Technical Departments if necessary.” 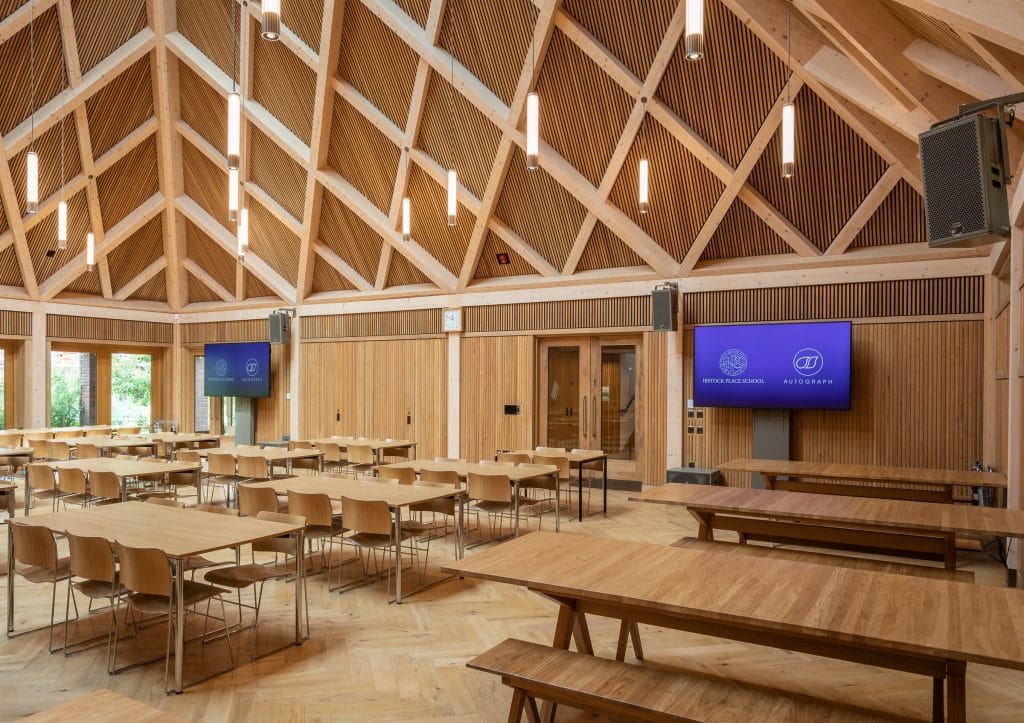 Adam proposed an audio system based around eight Meyer Sound UPJ-1XP self-powered loudspeakers run from an MPS-488HP power supply, partly because of their audio quality but also because of the long cable runs involved. “Our involvement with the project started once construction had begun and the main cable routes finalised. As the only route for cable was the same one as used for all the other extra low voltage services, we chose Meyer Sound’s 48v DC XP range as this minimised the risk of interference to the school’s data network. Due to the higher voltages, low impedance speaker cabling would either have to have been run separately or risk creating interference.”

The UPJ-1XPs are custom coloured, using a shade provided by the architect and in fact all the accessories (mounting brackets, wall panels etc) are painted in the same colour to blend as discreetly as possible with the room’s decor. A pair of Meyer Sound Amie subwoofers provide the low frequencies when required (live music and performance for example), while the audio processing and control is handled by a QSC Core 110f with an I/O-8 Flex channel expander, all controlled via a custom-configured TSC-80w-G2 Touchscreen Controller via a pair of Cisco SG300-28P network switchers. 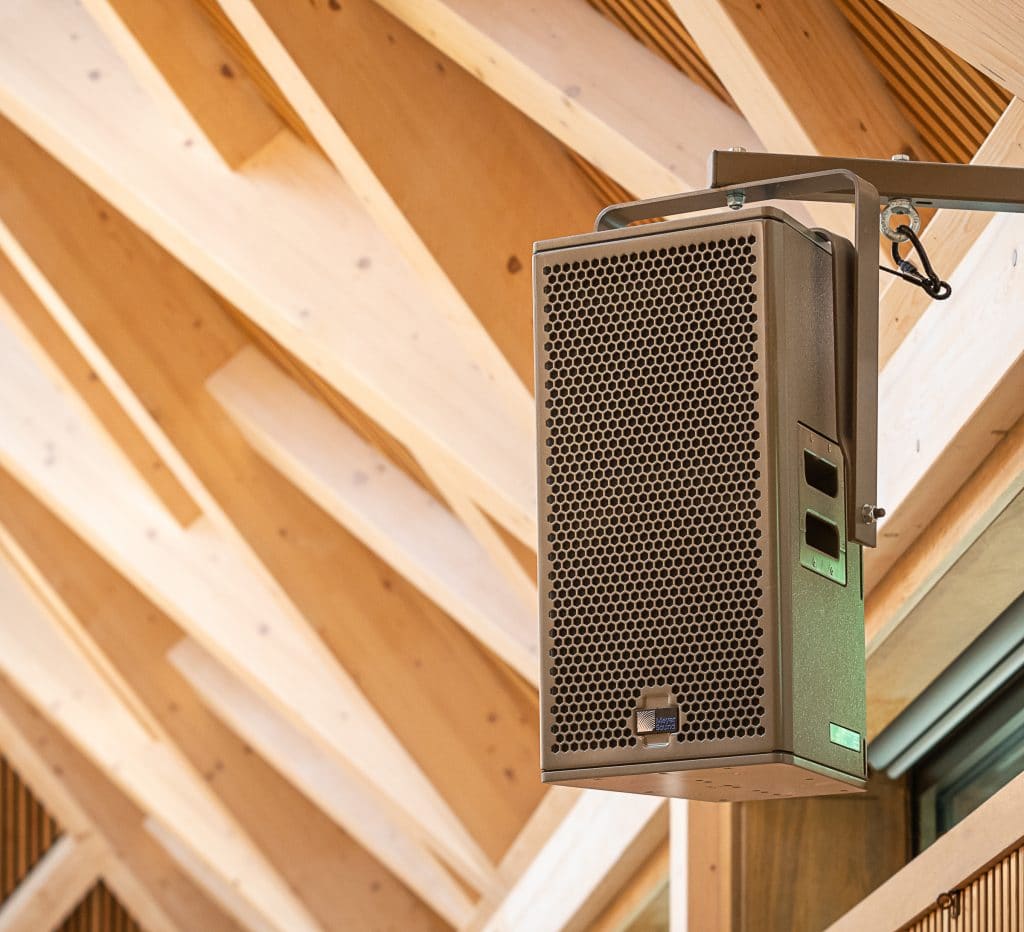 The wireless microphone solution selected is a Shure QLXD setup including two bodypacks and two handheld transmitters (the former supplied with a pair of Point Source Audio lavalier microphones), complete with matching antenna distribution, Li-ion battery packs, charging station and accessories. “We chose the Shure UA864 antenna as it’s an active design but with a small form factor that sits flush on a surface. The antennae are hidden behind two of the diamond panels that were custom made to be removable and which look just the same as the other panels – the result is an invisible antenna solution that provides even reception coverage across the whole space while maintaining the aesthetics.”

A Yamaha QL1 Digital Mixing Console with a single RIO1608-D2 Digital Stage Box provides overall control of all the sound sources. Adam adds, “When the hall is used as a space for larger events then the QL1 and Rio provide an audio mixing console for the technical department. When in this mode all of the input sources usually routed through the QSC Core processor are sent to the QL1 as well thanks to the flexibility of AES67 streams (the digital network protocol used for data transport).” 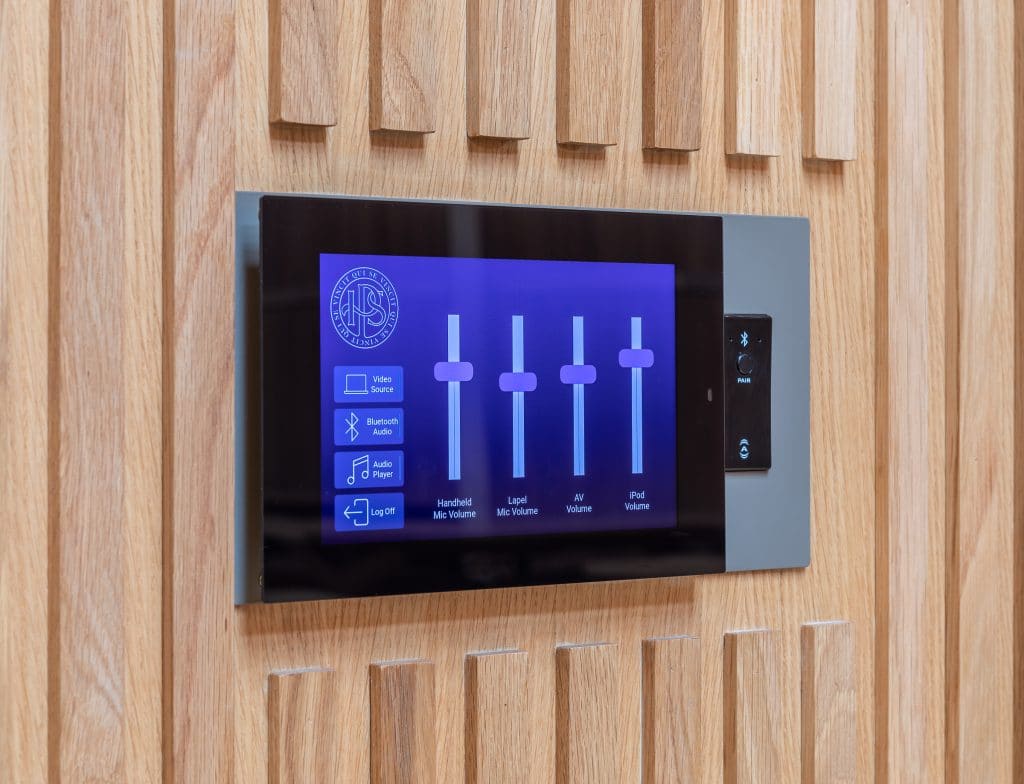 We also supplied a complete video display, transport and switching solution for the Great Hall. “The space enjoys amazing ambient light via huge windows and glass lanterns at the top of each block, so we needed something much brighter than projectors and screens. We supplied four Panasonic TH-86EQ1 Large Format 4K screens, each mounted on custom-coloured, electrically-operated Unicol Rhombus Trolley, allowing each to be used wherever there is power and a network point, principally for use in multi-media presentations but also for digital signage as required.” Kramer KDS-series encoders / decoders are used in the video data transport network, chosen their low latency and ability to operate on a 1GBPS network whilst allowing for easy future expansion anywhere on the school site utilising the schools existing infrastructure when necessary. A Sonifex audio converter interfaces video sound with the audio system.

The Sixth Form Study Centre is principally designed as a study location with dedicated AV facilities for teaching and presentations, but those facilities are also on the digital network. This means that audio and video content can easily be brought in from Great Hall if it is needed as an overflow teaching space, emphasising further the advantages of a networked audio and video over IP solution. We also supplied a wall-mounted Panasonic RZ770 projector along with a Draper Premier screen (recessed into the ceiling and operated electrically), while a pair of custom-coloured Martin Audio CDD6W loudspeakers, wall-mounted and powered by a single VIA2502 amplifier, complete the audio system. 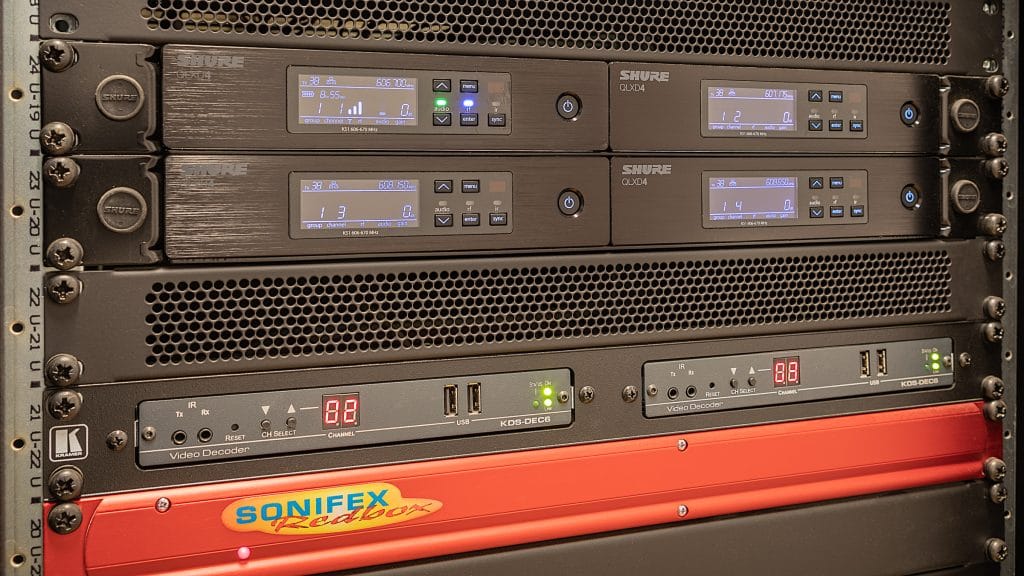 Andy Ward is the Theatre Technical Manager at Ibstock Place School and he said, “As the person within IPS that handles any audio visual scenarios, I was asked by the school how best to approach the audio visual elements of the new Refectory. We needed a system installed that was simple, with as little day to day input from me as possible. At the same time it needed the ability to be completely technically flexible for large events.”

“Autograph installed the perfect solution, giving the opportunity to use the building in numerous scenarios, at the push of a button. Their intuitive user interface and easy means of connectivity has made everything we have done, a breeze. I’m looking forward to see how the school uses this new multipurpose venue, and being able to finally put the system through its paces.” 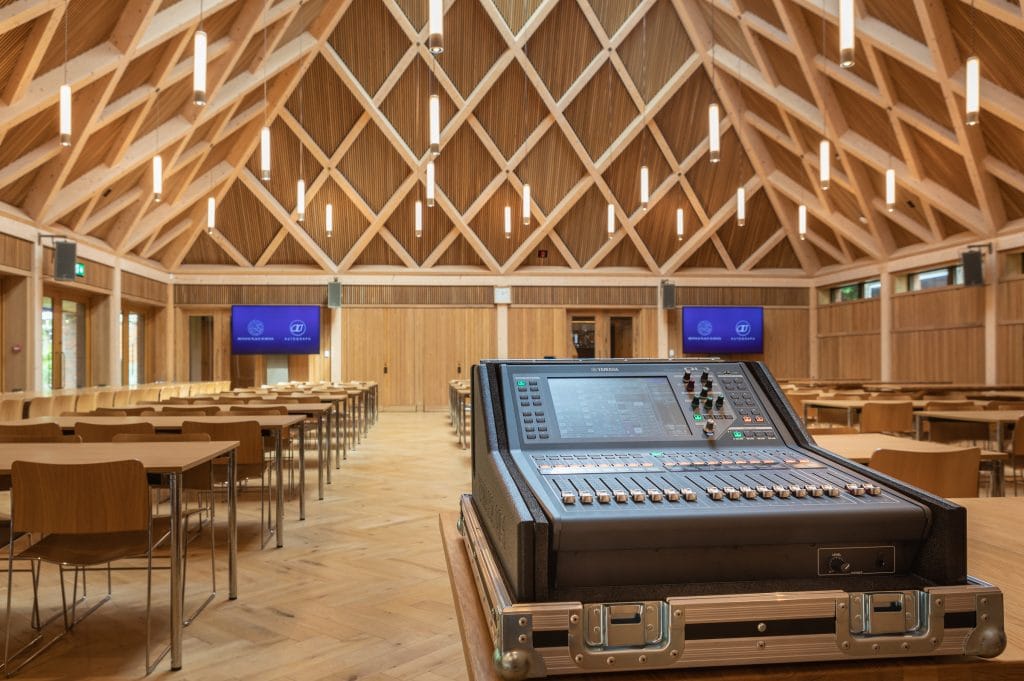