Football is back. This week sees the return of English football to our screens as teams from the Premiership and Championship try to complete the 19/20 season in empty stadiums. Queens Park Rangers‘ ground at The Kiyan Prince Foundation Stadium however will be far from quiet as they debut a brand new crowd atmosphere system at their game against Barnsley on Saturday at 15:00.

As the sporting world begins tentative steps towards reopening, creative companies are also trying to find new ways to use their theatrical skills and experience to mitigate the effects of the pandemic that overnight closed down their industry.

Autograph is the UK’s biggest theatrical sound company, they have supplied creative sound design services & sound equipment across the world for over 40 years. Working with the production agency Entourage, they are now pivoting from servicing West End shows to providing the atmosphere to a very different audience.

Designed and developed by our in house team, Stadium Sound by Autograph creates a live crowd atmosphere at sports events that can be dynamically controlled in real time to the game. The system is operated live to follow the energy levels and punctuate the dramatic moments as they happen. 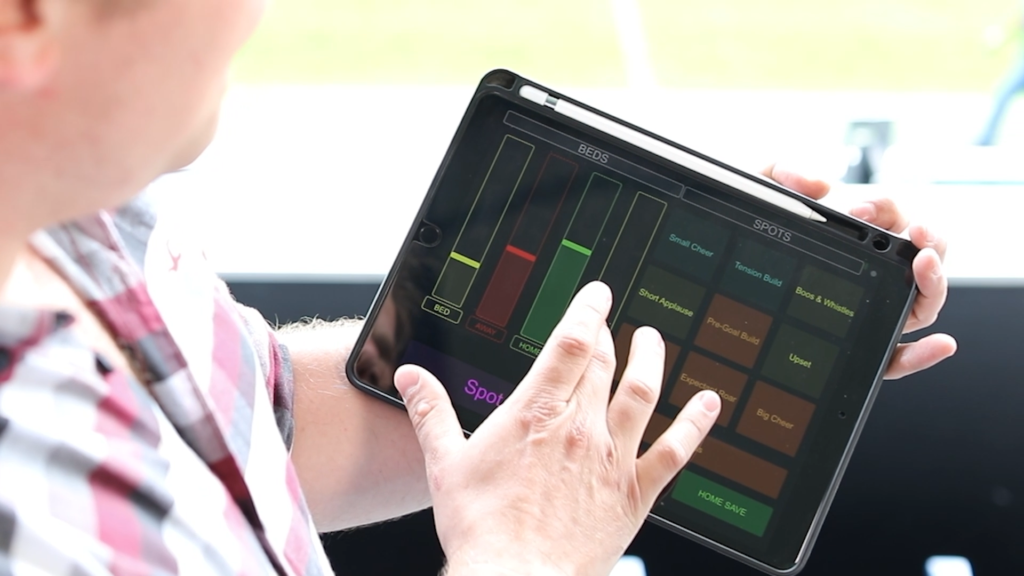 Autograph Sound Designer Ian Dickinson was a week away from opening a new version of Company on Broadway when the pandemic closed everything down and he was on the first flight home. In his new role as in-house ‘football expert’ he explains:

“Unlike the similar systems being used by the Premier League broadcasters, our system is actually played out into the stadium using a high spec 12.1 concert grade surround sound system. This allows the players to get the full psychological benefit of having the crowd behind them even though the fans can’t be there. The flexibility of the system also allows us to locate the audio to specific stands within the stadium and position the chants so they sound like they are coming from the home end.”

Swapping theatre stalls for football terraces, Autograph and Entourage are now working to bring the sound of the crowds back to Championship Football for the remainder of the season.

“We are working with Championship clubs to help restore home advantage during the last vital few weeks of the season. The data from the Bundesliga is showing that home advantage has been radically reduced since the lockdown with a drop from 43% to 21% of games resulting in a home win. We believe that this advantage can be restored by creating a raucous home atmosphere that includes home team chants from the home stands to support the players on the pitch. We hope that once the Premier League players see the benefits of playing with a home crowd atmosphere that the Premier League will reconsider their position to enforce silent stadiums. ” – Andy Barnes, Entourage

The sound of the crowds has been sourced from Autograph’s extensive archives, gaming libraries, and from partners like Fanchants.com. Visiting a demo on Wednesday at QPR, Andrew Holland from Fan Chants said:

“I had to shut my eyes, just to check because the sound was really authentic. They can even make the chants come from where they would actually come from in the stadium, thats the really impressive bit that I hadn’t really thought of before, but it really sounds amazing. I’ve spoken to an ex-professional and we’ve all been watching matches in echoey stadiums and realising that it’s not always the visual of the fans, but it’s the noise, when they are moving forward or defending that’s important. There is a real psychology to it”

The system will debut in a Championship game for the first time at Loftus Road as QPR take on Barnsley on Saturday, and is being offered to other championship clubs over the remainder of the season. The team are also investigating how to roll out similar solutions for Rugby, Cricket and other sports later in the year.

For booking information about the system or for media enquiries please contact hello@entourage.live or call Andy Barnes on +44 (0)20 3918 9060.