Epsom College is a co-educational independent school on Epsom Downs in Surrey for pupils aged 11 to 18. Originally founded in 1855, it was granted royal patronage by Her Majesty Queen Victoria in the same year and its royal connections continue to this day as its patron is Her Majesty Queen Elizabeth II. The college takes day pupils throughout with some boarding in five of the 13 houses in the senior part of the school. 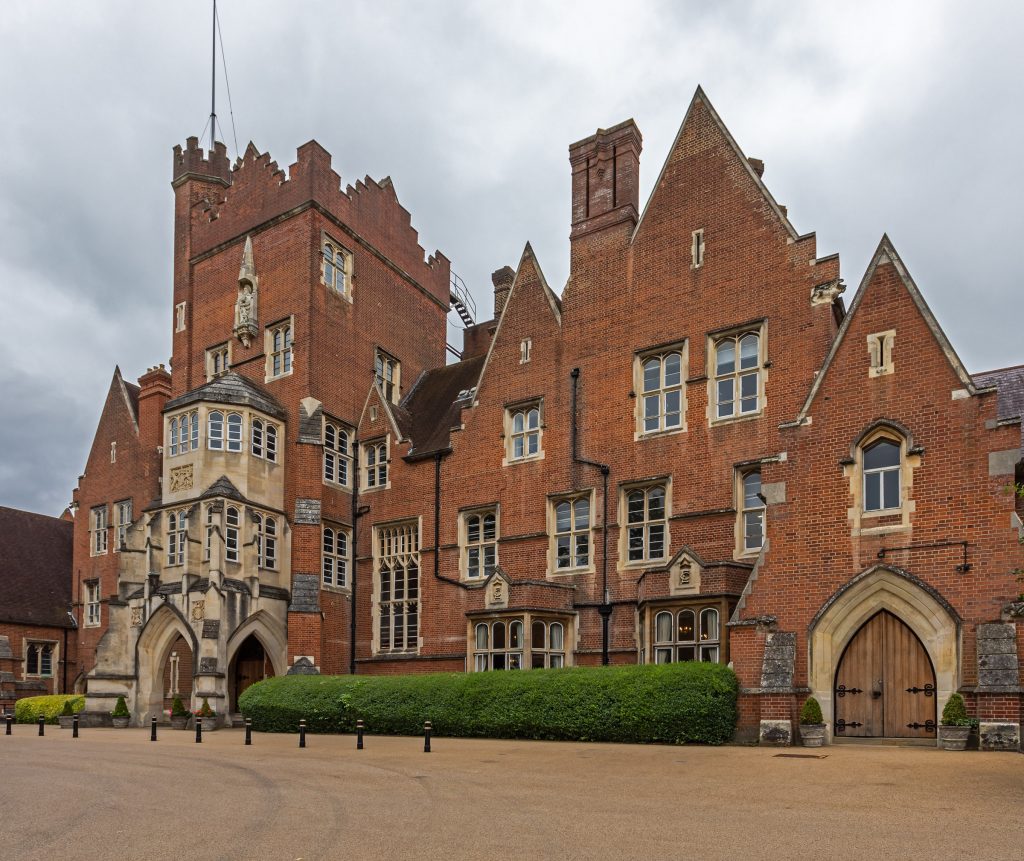 Our relationship with Epsom College goes back some years when we were initially approached to supply some sub-miniature microphones and, subsequently, a new EM Acoustics public address system for Big School. We were then invited back to discuss AV distribution solutions as it had become apparent that the College’s existing systems were in need of updating to remain in line with the needs of a leading independent school. Those discussions continued and eventually, it became obvious that a centralised AV control and integration system was required in addition to a new PA in the Main Hall. Big School also needed both ‘college’ and ‘performance’ modes according to its various uses, while at the time the Chapel was the largest individual space with an installed PA but had no AV facilities. 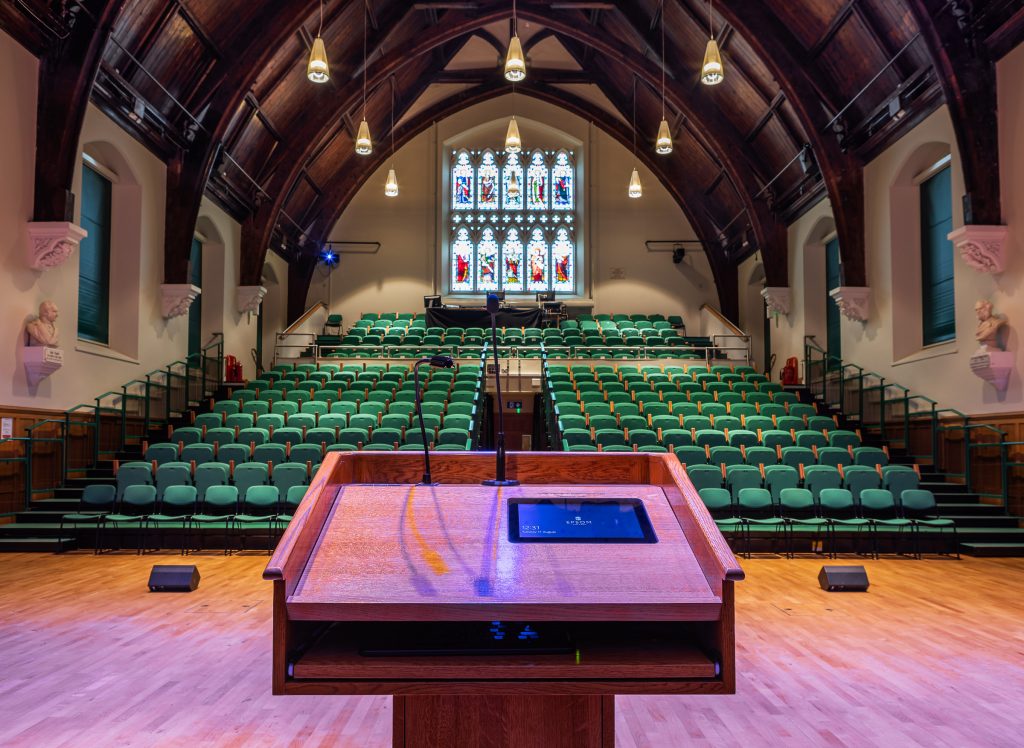 Prior to the commencement of works, our team of engineers introduced and demonstrated numerous new technologies to the client as well as bringing a fresh technical perspective to what was possible with modern equipment. We subsequently designed, installed and commissioned a bespoke, site-wide networked audio-visual system that not only meets the current needs of the school but which also allows for easy expansion as its needs continue to grow.

Three separate locations are now networked together for AV purposes: Big School, principally the college’s main auditorium, Main Hall which is a smaller, multi-use auditorium and The Chapel, historically used for only services but which has found increasing utilisation as an additional space when required. 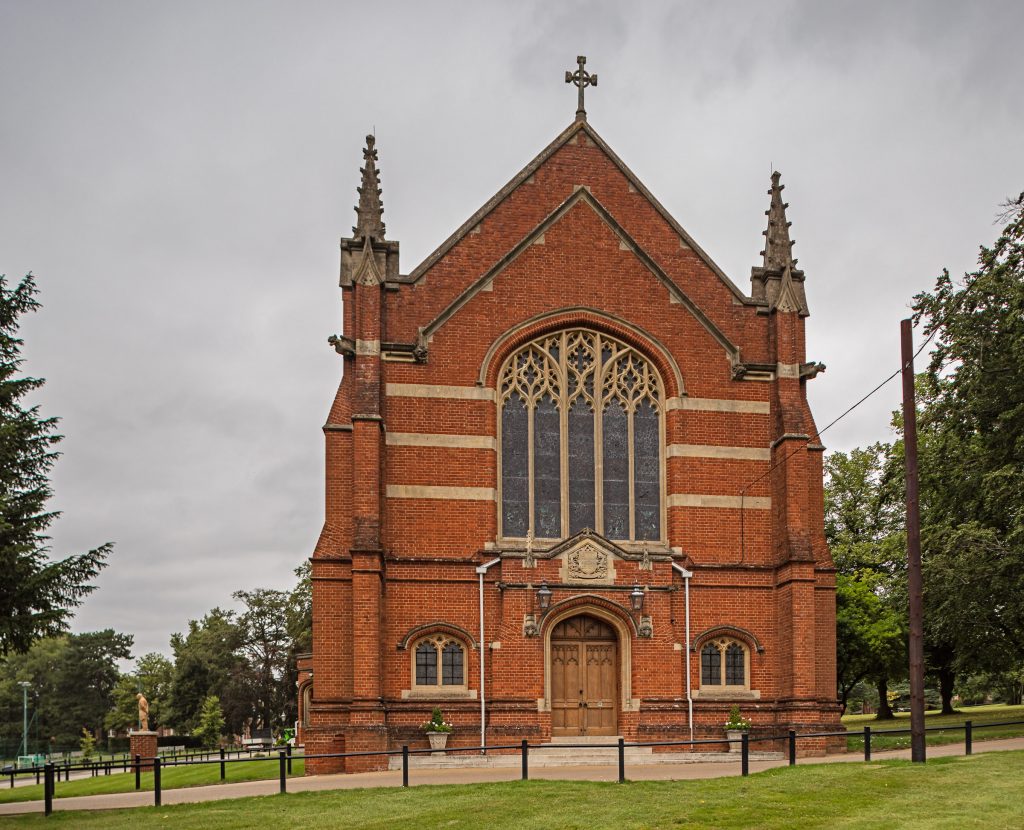 The integrated AV system utilises QSC’s Q-SYS controllers and their customisable touch-screens which allow operation and mode-switching by school staff from any location. There is a QSC Core unit in each room, linked by a fibre network using Netgear switchers. We also supplied eight channels of Shure’s latest SLX-D digital wireless microphone systems for use across all three locations. 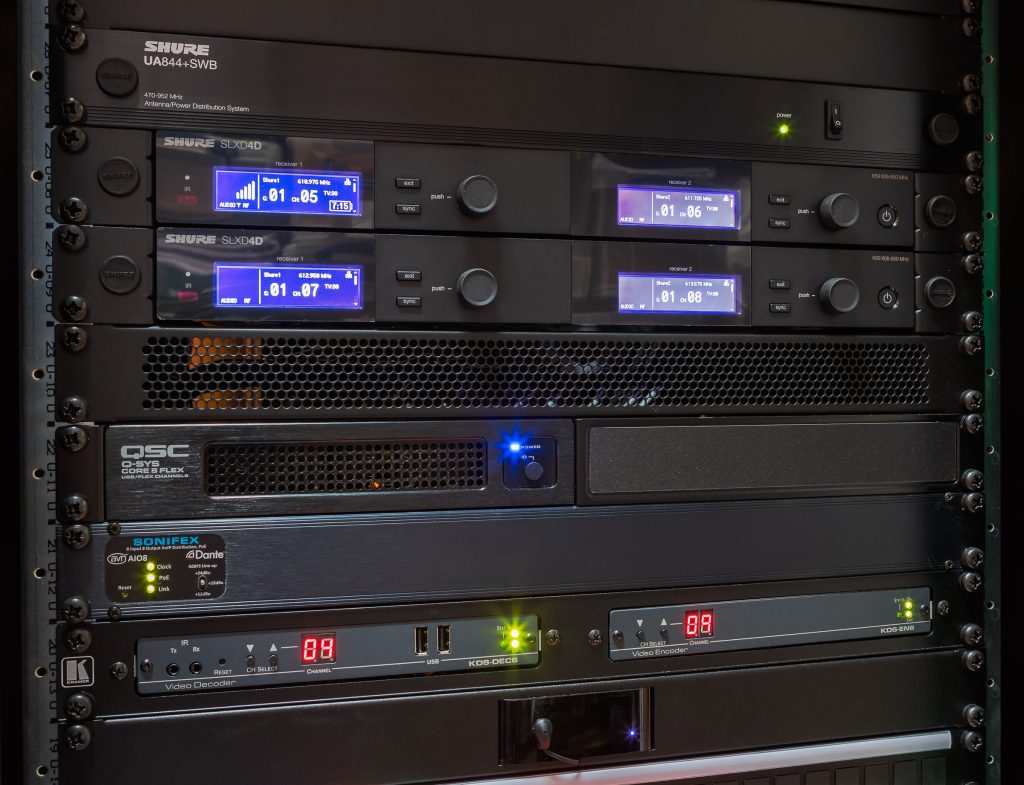 Our design for the Chapel includes eight Panasonic screens mounted on motorised, automated arms that hold them either flat to the walls or extend them outwards such that everyone in a capacity audience can clearly see a screen in 4K resolution. During the COVID pandemic, social distancing requirements meant that the Chapel (as the largest space) has been used for other events where larger numbers had to be accommodated safely. The centralised control via custom touch screens also means that the College’s full-time AV team are freed up to handle things such as live streaming events. 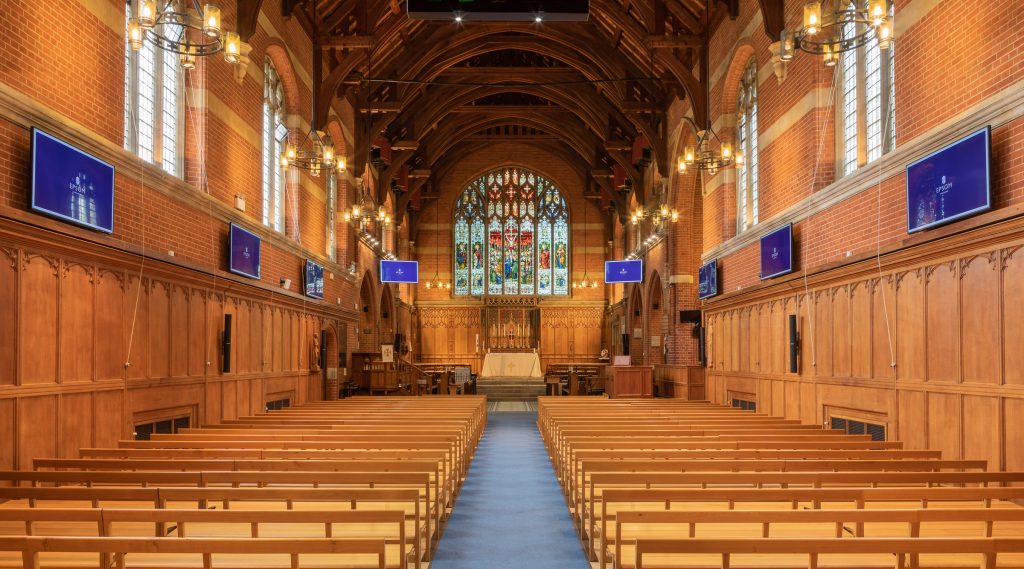 Epsom College’s AV Technician Mark Bishop commented, “After using Autograph for a previous PA install, we were very keen to use them again when planning a new AV system across the College. Our provision for three spaces – Main Hall, Big School and Chapel – had become unreliable and we needed a modern, updated system to provide much higher quality AV for the growing needs of College events. Autograph quickly understood the distinct needs of each room, then designed and installed a system which has already made an incredible difference to every event throughout the year.”

“The new networked system using Q-SYS in every room means we can quickly set up for events at short notice, with the confidence that each space will work as expected every time. The Q-SYS touchscreens mean that operation is simple for all staff to use, but with the option for our AV team to make more detailed changes to the setup when needed.” 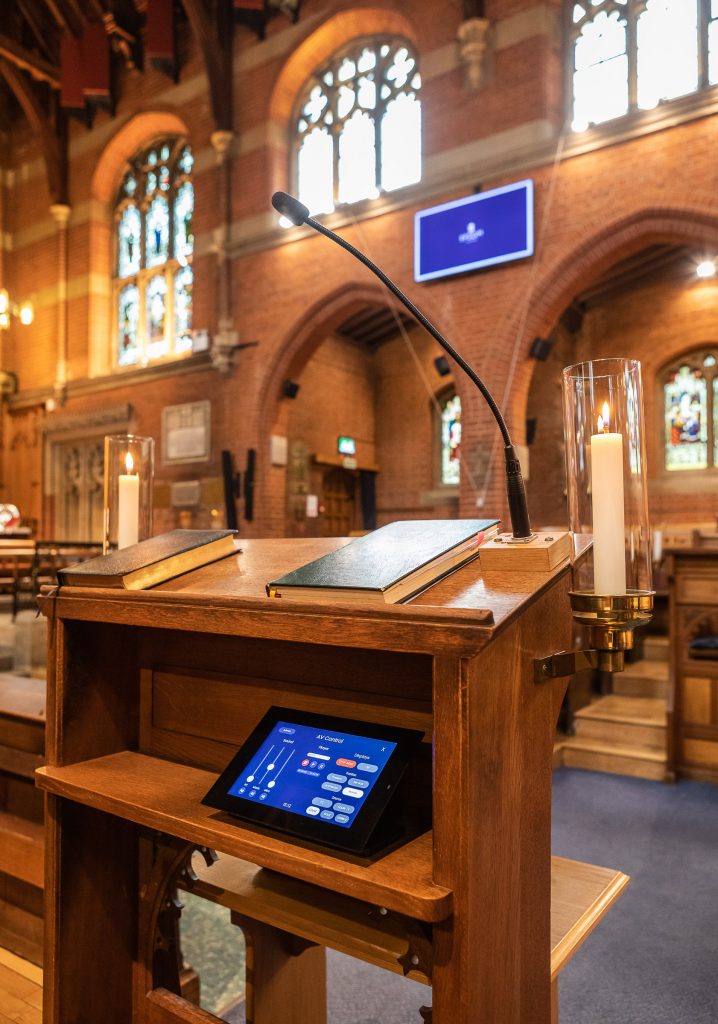 He continues, “Big School is a particularly busy space with multiple uses in a single day. Adam and his team designed the system so we can quickly switch from a morning assembly to a visiting lecturer with their own equipment which needs integrating with ours, finishing with an evening concert. This is a huge improvement and provided us with our main aim of quality audio and video, along with the reliability expected by all College staff.”

“The new system in Chapel with 8 screens on motorised arms and a new lectern with touchscreen and video capabilities has enabled the College to increase the number of events they can host which require AV.  Again, Autograph’s design and installation has given us the highest standard of AV, while being sympathetic to the historic nature of the building.” 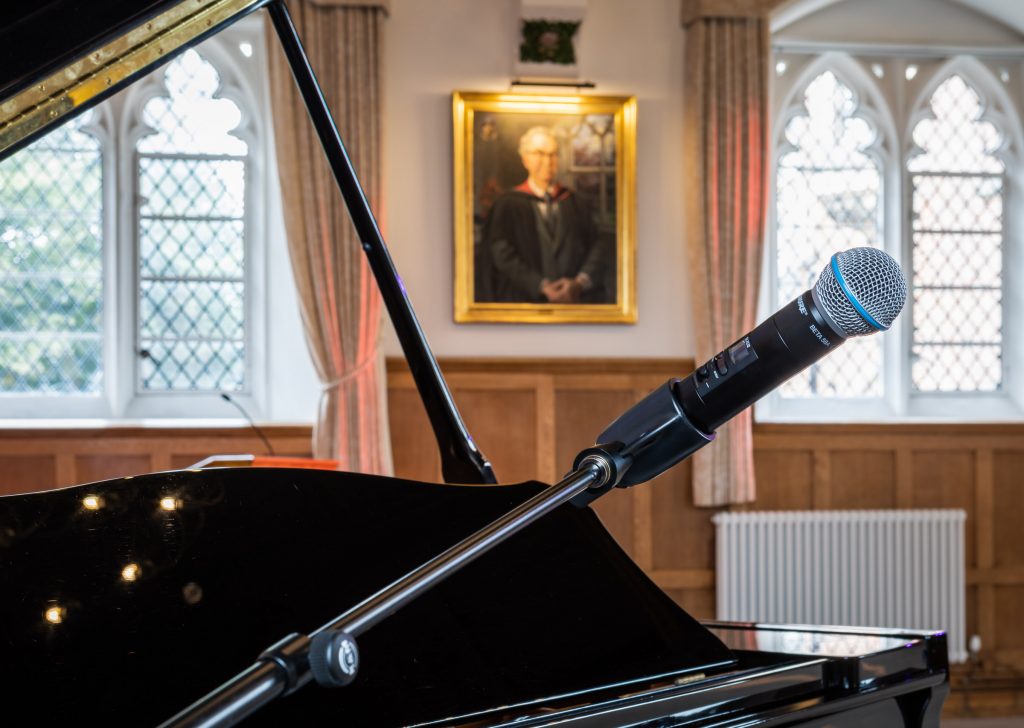 Mark concludes, “The new PA in Main Hall, along with a brand-new rack containing a media player, Shure handheld and lapel mic systems and a touchscreen, means the room is much more flexible than before and the improved audio quality was immediately obvious.”

“We’re already looking forward to working with Autograph again soon on a number of projects!” 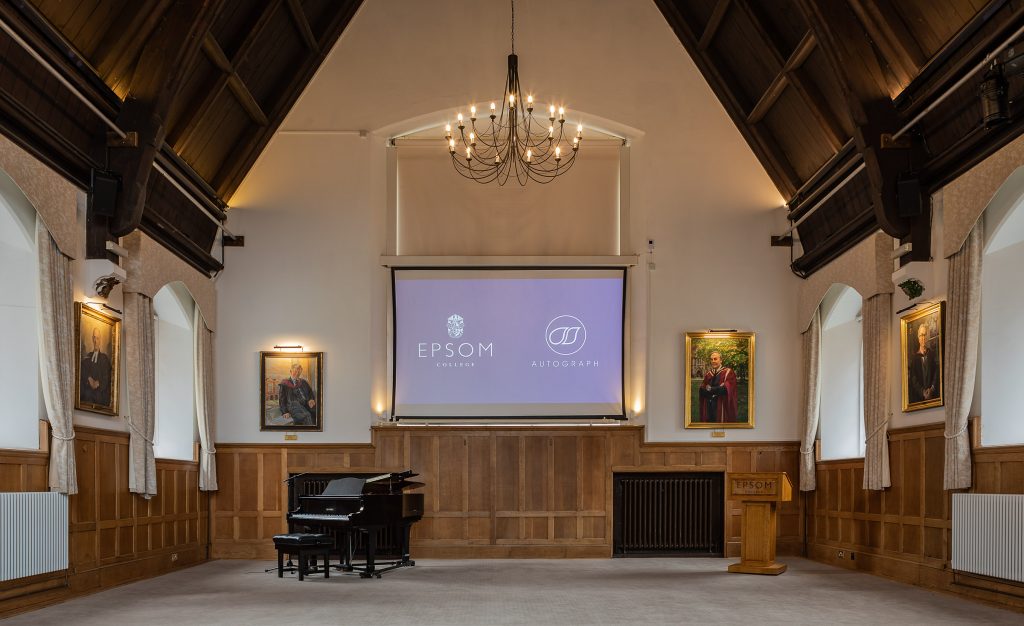 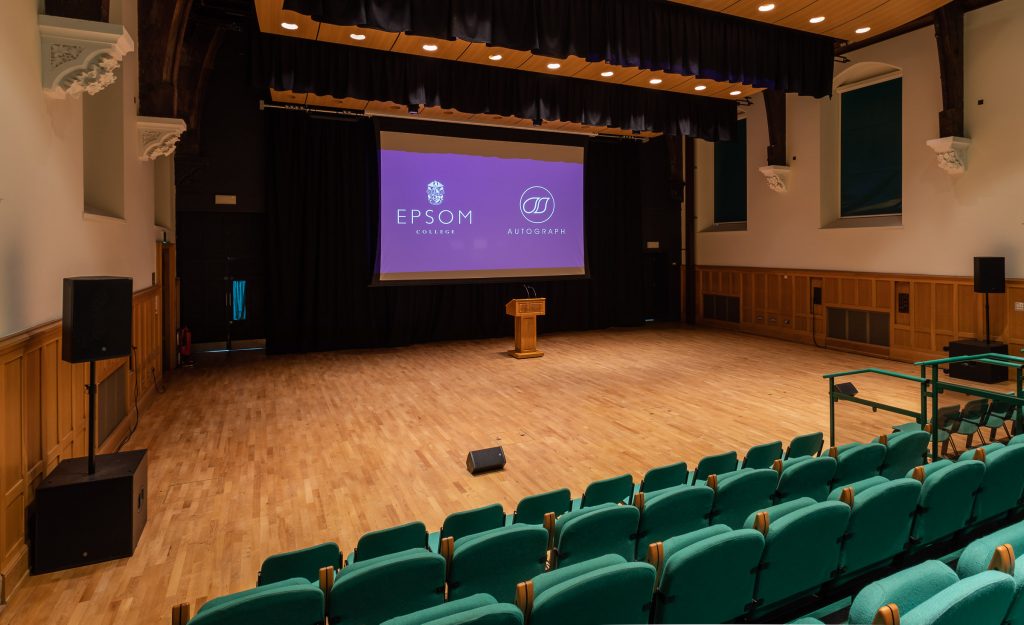 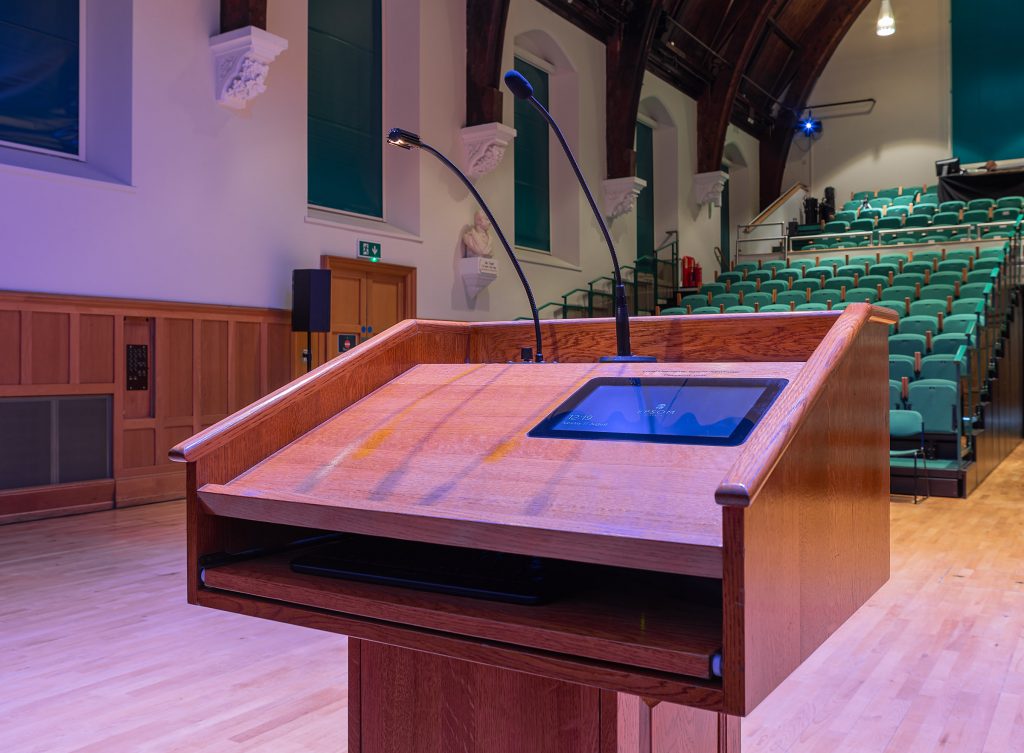